BASgatewayLX Now Maps Up to 100 Modbus Devices to BACnet 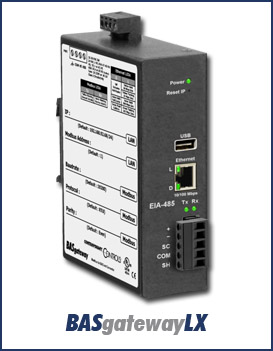 The BASgatewayLX is now able to support up to 100 Modbus serial or TCP devices to BACnet/IP from its original 30. Total point count remains at 1,000. According to Joe Stasiek, Sales Manager for Contemporary Controls, "We have customers wanting to connect numerous Modbus devices; each with six or more points. Increasing the number of devices supported helps them out immensely."

With the BASgatewayLX, each Modbus device appears as a virtual BACnet device. This makes it easier to work with the Modbus devices on the BACnet network. Also, if you have many identical Modbus devices, you can copy/paste your Modbus points in the head-end.

Modbus remains a popular network interface, and is commonly found on jobs such as boiler control, variable speed drives, and metering applications. But these devices lack BACnet compliance. To make Modbus devices appear as individual BACnet devices, a BASgatewayLX is used. BACnet COV notification is supported on 200 points (100 Analog and 100 Binary points).

The BASgatewayLX has one 10/100 Mbps Modbus TCP and BACnet/IP Ethernet port and an opto-isolated Modbus EIA-485 serial port for Modbus RTU or Modbus ASCII devices. A total of 100 Modbus serial or TCP devices, represented by up to 1000 points can be made visible to the BACnet network by using a BASgatewayLX.

BASgatewayLX Now Maps Up to 100 Modbus Devices to BACnet

Final Voting for the CTA Awards is Now Open